Rowen’s eyes cracked open. He just laid there trying to figure out why the barracks were so cold. And why did his body hurt so much? Then he remembered he was laying in a trench and his mission had gone straight to hell and he was covered in dark, sooty snow.

He sat up too quickly. Pain shot from every part of his body to his spinal cord and up to the base of his skull. He knew his was good news, in a way. No nerve damage or paralysis. The plasma burn in his side ached.

Rowen dug into his cargo pocket looking for a small med bag. There should be something pain there. He was in luck. He stabbed the tiny ampule into his neck. The pain eased and his senses cleared with a small whoosh.

He tried to sit up. It hurt. He’d need to wait a few minutes for the drug cocktail to take full effect. He tried to focus his eyes on his wrist chrono. The small LED digits swam around on the clock face. He squinted, and the numbers calmed into a legible number. It had been sixteen hours since they left the base and about eleven hours since the last fight.

No one came to collect our bodies. No one. Deep inside the flicker of anger bloomed into white hot rage.

He pulled himself to his feet bit by bit. His full energy still eluded him. He blinked away the forming ice crystals. It was still dark, at least the snow had stopped falling. He also noticed that the ubiquitous sound of battle had fallen off. The tempo of explosions and gunfire dropped off to occasional sounds that drifted far to the north of his location and away from the direction of his House’s HQ bunker.

His kit was in tatters. His helmet was gone. His weapon was gone. His armor was shredded. He unbuckled and unhooked the various pieces. They fell soundlessly into the snow. His chest and back plates dropped with a thump. His battle utilities were muddy and torn. The only weapon he had left was Harris’ spiral dagger.

It occurred to him that the frigid air was keeping the smell of death at bay. He looked around at the carnage. It was thankfully covered by a blanket of snow. The bodies of his team were obscured. He pocketed their meat tags while giving thanks to the gods he couldn’t see their faces.

He was not a pious man. It occurred to him he should say something. “I’m sorry, lads. It never should have come to this. I should have taken a stand against that blue blooded dolt.” Rowen took a deep breath. “I should’ve died with you. I failed you… and my punishment is to be the last one standing.” He blinked back tears.

Rowen’s jaw tightened. His fists clenched. He pulled the dagger from his boot. “I make this oath to you now. I will avenge your lives, then I’ll meet you at the Meade hall in Valhalla.” He drew the blade across the palm of his hand and made a fist. The blood dripped to the ground, melting the snow.

He started moving out as fast as he was able. He wasn’t quite able to pick up a full run even without his heavy armor, but he could achieve something close to a double time march.

He became aware that his body sock that was worn under his fatigues must have had some tears in it as he was feeling the chill air in various parts of his body. He fumbled for another ampule in his cargo pocket. He slowed to a walk and jabbed his neck again. He continued his leisurely stroll until he felt the full effects of the drug.

He picked up the pace. His feet were numb. He blew into his hand and rubbed them together. He would need the use of them soon.

He passed the area where Dorn and Owens died. The snow covered everything. Not seeing the carnage did not stop his blood from growing hotter.  By the time he passed what was left of Ferrell, he was at a dead sprint. He approached the outer boundaries of his Lord’s host.

He slowed to a quick, confident stride. Rowen ignored the looks and comments from the marines in the wide trench near the chow hall where his doomed mission began. Hot steam flowed from his nostrils like a Three Horn Aurochs. His vision narrowed as he pushed past the armored men.

One of the Death Dealers stopped and raised his visor. “Damn my soul if that’s not the angriest conscript I’ve even seen.” He looked to his fellows and laughed.

Corporal John Rowen, leader of the fourth squad, Beta Platoon of his Lord Bryce’s Auxiliary Combat Forces, set out to right this wrong. They trained him from an early age to respect and obey his betters. It was literally beaten into him. He had also heard whispers about some kind of other conditioning that would not allow the serfs to harm the nobles. He was about to find out if that was true. 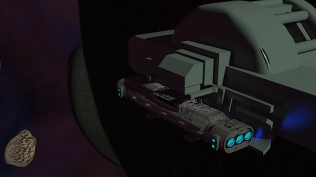 Rick Partlow’s Drop Ship series is a worthy successor to Heinlein’s Starship Troopers. Cam Alvarez is a scrappy, young tough guy trying scrape along in a sprawling mega city. When he gets into trouble with the local bad guys the cops give him a choice of going to jail or joining the military. I’m sure […]

*** “All rise.” Sir Ren shouted from the back of the empty field operation center. After the battle had successfully concluded the day before they began breaking down their command center to redeploy to the Titan and head home. Corporal John Rowan jumped to his feet. Sir Basil Singh stood next to him. At the […]

*** Rowen brushed by the conscript private guarding the bunker entrance. The junior man gasped. “Corporal! I thought you were dead.” The corporal spun on his heel and put his finger to his lips. The wide-eyed private just nodded quickly and backed towards his guard station. Rowen descended the stairs four at a time. He […]

*** Rowen’s eyes cracked open. He just laid there trying to figure out why the barracks were so cold. And why did his body hurt so much? Then he remembered he was laying in a trench and his mission had gone straight to hell and he was covered in dark, sooty snow. He sat up […]

*** The men were shaken. They were no strangers to combat. But they had lost none of their own in a long time and they had known each other for years. And even if this wasn’t the first death of a comrade they had experienced, it certainly was the most senseless. Rowen retrieved the remaining […]