The snow was growing deeper. Empty ammo crates and discarded, broken equipment lay were they were hastily dropped. The first signs of recent combat.

The continuous din of battle grew ever louder. The low hanging cloud lit up from gunfire and explosions.

Cort swiveled his heavy auto slugger around a corner as they advanced. “Blood.” He pointed with his chin.

Blood was everywhere. Wide spray patterns indicated that there were more than one, and possibly several people’s worth of blood here.

“Corporal, I have a bad feeling about this.” Harris began, “why didn’t they just release the seekers? They could find the coordinates without us.”

“Harris, sir… He’s Horn” He gestured to the rifleman behind him even though he would probably miss the gesture.

“Whatever. Just shut up.”

“Corporal Rowen, I’m only getting video feed from you and Ferrell. And no telemetry from anyone.” Redfield asked and Rowen had to wonder how long he had been listening in.

“Yes, sir. I tried to explain this before you dismissed me from the mission brief—”

Sir Reg sighed heavily. “Save your excuses. You are approaching a set of stairs. Three hundred meters ahead after the next turn. Contact me when you reach them.”

They continue along the trench. There was more evidence of heavy fighting, Empty battery packs and magazines, pock marked walls, black grenade craters. They took the next corner. Everyone stopped and gaped the horror in front of them.

Six marines impaled on large spikes. The crude spikes stuck out of the corpses’ mouths. Their entrails poured out on to the red soaked ground.

“Beta Actual, are you seeing this?” Rowen reported.

“Yes. We expected this. Were you not in the mission brief?” His voice dripped with disdain.

“No, sir. You dismissed me.” He said through gritted teeth.

There was a pause. “Ah, yes.” Another pause. “Continue to those stairs.”

The squad warily passed through the gore and carnage. “Who are these guys?” Horn asked. “I don’t recognize that patch.”

“Me either. But that armor is not much better than ours. Conscripts?” Dorn asked.

Rowen put his fist in the air, halting the squad. “Listen.” Everyone complied. “You hear it?”

“Can you be more specific, corporal? Cort asked. “Are you talking about the spider mechs or that ungodly howling?”

“I was talking about the howling but… What spider mechs?”

“The mechs are not headed towards us.  That howling is at our eleven o’clock. War dog. I can’t tell the breed.” Cort answered. His uncanny ability to hear certain things amidst battle always impressed Rowen.

The comm crackled. “Rowen, get your squad moving we’re on a timeline here.” Redfield demanded. They started moving forward at a trot.

They approached the stairs and slowed; all guns brought to bear. The stairs dissolved into a crater. “Sir, are you seeing this?”

“Yes.” He paused. “Ferrell, I want you climb out at that point and see if you can spot our auto-turrets. They should be eighty meters dead in front of you. We need to know if they have been destroyed.”

The blood drained out of Farrell’s face. He swallowed hard and looked to his squad leader.

He shook his head.

“Corporal. It is imperative that we find out if those turrets are operational.”

“He’s the only one with a high def body cam. I need to see.”

“Can I launch the seeker?”

“No! That must be dropped at the waypoint. I’m growing weary of your questions.”

Rowen took a breath and tried to calm himself. “Sorry, sir. But can I just use my helmet cam? The enemy’s sentry guns are likely to shoot anything that pops up from the trench.”

“Your helmet cam is grainy. I can barely make anything out. I will not warn you again, Corporal!” Redfield cleared his throat. “Farrell, jump up there and just take a quick peek.

Rowen clicked on his other comm channels to see if any of the squad leaders or their First Sergeant were online. All status’ black.

Ferrell shrugged and moved to the blasted stairs. He braced his arms on the ruined walls and took a few deep breaths. “In position, sir.”

With a grunt he vaulted himself to the top of the trench one meter above. “Sir, can you—”

A bright plasma blast evaporated Ferrell halfway up. His legs stood a moment while his entrails leaked to the ground just before his legs collapsed.

“Bloody hell!” Rowen shouted into the comm. Several others cursed and flattened themselves against the dirty trench wall.

Rowen took several breaths trying to calm the primal rage building in him. Harris just stood there, mouth agape. Owens was visibly shaking until he threw back his head and unleashed a dark howl.

“Yes, corporal, I saw.” Redfield said casually. “Police up his meat tag and carry on your mission. 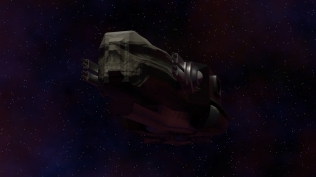